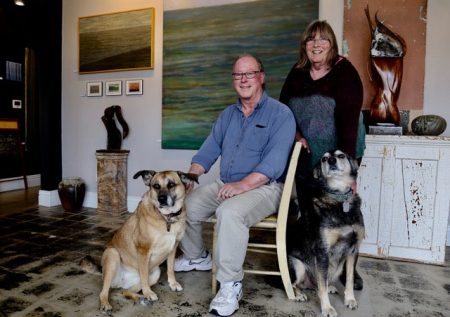 When Tom Groenfeldt asked us to be the subject of his contribution to The Meadows Gallery’s new exhibit, we were both deeply honored. This exhibit features the work of seven notable Door County photographers, each contributing a portrait of someone they feel has been most impactful in their lives or the community. The exhibit will be open July 2 through Aug. 23 at Meadows Art Gallery, Sister Bay located inside the Scandia Senior Care Center, Sister Bay.

From the Door County Pulse:

The Meadows Gallery’s new portrait exhibit will feature the creations of seven notable Door County photographers, who took portraits of the most impactful people in their life and the community. The exhibit will be on display July 2 through Aug. 23; an opening reception will be held July 6, 1-3 pm.

The perception of “impactful” was left to each photographer, so they captured images of educators, artists, clergy, public servants, service providers and more. The concept was further customized through each photographer’s personal style.

“I initially had been trying to organize this exhibit for 30 years and was pleased to see such diversity and unique vision that will honor and bring interest to our community and its members,” said Tom Seagard, an artist and director of the Meadows Gallery.

The Meadows Gallery is located inside the Scandia Senior Care Center, 10560 Applewood Road in Sister Bay.