On Form (part one)

In my last blog, I discussed the slow emergence and development of four separate themes in my work, themes that have reappeared often enough now that I refer to them as visual motifs.  Additionally, I touched on the twin roles that these four visual motifs have assumed, these motifs: 1) aid in creating a coherent body of work and underlying conceptual constant, and 2) act as a visual medium, each allowing me to capture and explore, in a variety of ways, every aspect of the atmosphere that inhabits and defines those fleeting moments in life which exist so vividly in our minds eye, but are nearly impossible to describe or convey in conversation or with the written word.

Put another way, the visual motifs that I have developed provide a concrete reality, a stable image that all viewers can agree upon. Against this backdrop of objective reality I can then attempt to create the subjective and subtle atmosphere that exists as the essence of each moment. However, the atmosphere that I choose to create and the emotions evoked by that atmosphere, regardless of its connection to a particular visual motif, do not come from the motif, but from its surroundings, from its placement on the canvas and from the subsequent space that placement creates.

Any discussion of artistic space naturally (and appropriately) leads me to a discussion of form and one of the formal elements that is perhaps most relevant to my work: negative space. 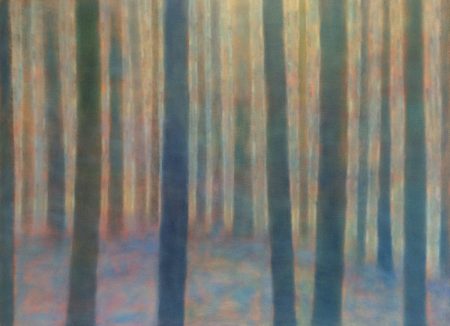 In this painting, the viewer will perceive first the subject matter, one of my visual motifs: trees. I have felt, since painting homecoming, that it is a painting that captures the moment when the early morning sun first breaks through the trees on a cold winter day. It could perhaps also be a painting of an early spring morning, or maybe the last rays of sunlight at the end of a midsummer day. How one chooses to interpret the moment captured in this painting is entirely subjective, but one thing is certain, the trees provide the viewer with very little in the way of visual information upon which to build a subjective impression. Below, is the same painting; the work that I’ve done to fill in the negative space between the trees has been removed. 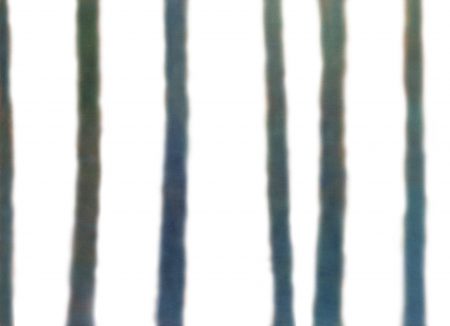 There is a well-known statement in the art world that I’ve repeated many times when teaching: meaning exists within the negative space. I think this example clearly illustrates the principle behind this statement. Gone is any sense of atmosphere, instead what we are really presented with is a series of thick, dark lines. The negative space remains, but the “feeling” of the painting has been completely altered. In fact it is the space between and around the objects that we refer to as “subject matter” that provides us with the actual visual information as to a specific moment in time. In a painting, we cannot rely on the sound of birdsong to tell us it is morning; we cannot rely on the feel of the air on our skin to tell us that it is a brittle winter morning, or an inviting afternoon in late May. Those associations, conjured by applying (in the right proportions) specific pigments on a canvas, are created between the trees, in the negative space that is outlined by the forest.

Previous Captured Moments Next …meeting/introducing my influences (part one) …