Margaret Lockwood on the commissioning process…continued

In my last blog, I discussed my commissioning process, so I thought it appropriate to provide a few examples of the process working itself out in the “real world.”

I  had  mentioned  that,  when  an  artist  accepts  a  new  commission,  their  role  shifts  slightly, from Artist to artist, or even from artist to craftsman. This shift of course results naturally when more than one person – the commissioner in addition to the artist  – imposes  their  will  upon  the  final  product,  usually  in  the  form  of  a  set  of  instructions to the artist, which dictate the size, color palette and subject matter (among  many  other  variables)  of  the  final  work.  In  my  previous  blog,  I  had  also  mentioned that of the two types of people who purchased my art, the second type tended to commission new work, usually based upon an older work that didn’t quite line up with their initial desires or the feel of the space in which they intended to hang the painting.

As  it  so  happens,  I  recently  received  two  commissions  that  illustrate  clearly  two  variations on this process. The first was based upon my tree-series. This is a series that I enjoy very much, and have developed over the years as a way of representing the  endless  variety  that  exists  in  the  quality  of  light  that  daylight  hours  bring.  Morning, midday, afternoon, evening and the moments in between; each has a special  character,  a  unique  mood  that  is  conveyed  through  the  interplay  of  light  upon the bodies, branches and leaves of each tree, and each character and mood contains  the  potential  (if  captured  correctly)  to  effect  our  own  characters  and  moods when we view them in real life or in a painting (this, in the end, may be the true power of representation).

In  any  case,  the  commissioner’s  initial  desire  was  for  a  painting  that  either  represented early morning or midday light filtered through the leaves of the forest, or perhaps just as likely, that complemented the character, mood or color scheme of the painting’s final home. I eventually provided them with two versions (below), one that  conveyed  a  lighter,  more  “spring-time”  character,  and  another  darker,  more  mysterious variation:

In  the  end  however,  neither  was  chosen.  Instead,  the  commissioner  changed  their  mind in favor of a painting that evoked the moment that exists just after the sun has set (below), a moment in which the negative space between trees is loosely defined by  the  rosy  glow  of  an  evening  sky,  and  which  represents  the  borderline  between  night and day, a moment when one can still see – but not in any great detail. 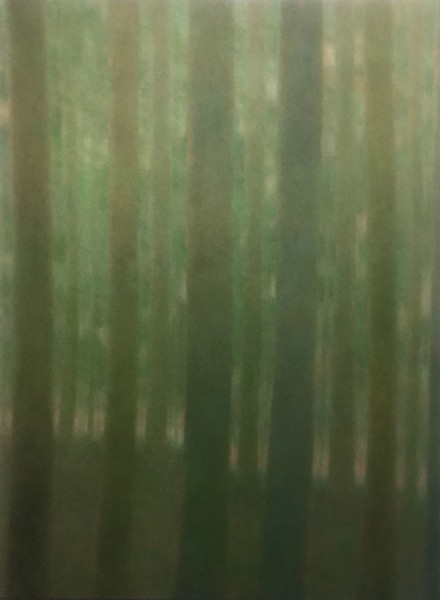 The second commission was based upon two paintings that hung upon my gallery walls  –  both  seascapes.  In  some  sense,  one  important  concept  behind  much  of  my  work could be boiled down to a personal fascination with the interaction between the  four  classical  elements,  or  more  specifically,  between  the  intersection  of  one  element:  light  (fire),  with  the  other  three:  earth,  air  and  water.  If  my  tree-series could be viewed as an investigation into the relationship that exists between earth, air and light, then my seascapes could be thought of as “studies,” which like the tree-series, explore the progress of the day, and the shifting moods that accompany that progression as the sun’s light mingles with the correspondingly shifting currents of air and water.

Each moment in time, each period during the day, the sun’s rays paint a new palette upon  the  heavens  above  and  the  sea  below.  As  mentioned  earlier,  the  initial  inspiration for the final painting was based upon pre-existing works; there was no intermediary step of earlier attempts. Instead the final product (below) ended up as an amalgamation of the two paintings above, the client requesting the color palette provided by one moment in time (represented solely by water), and from another, a composition that resulted from the visual juxtaposition of air and water. 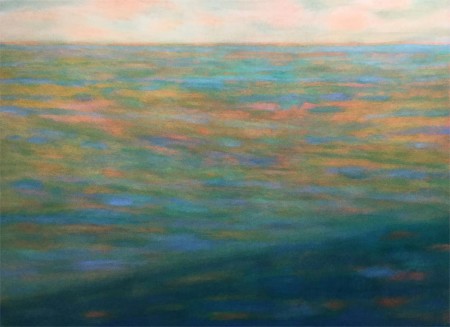 As  a result  of  the  commissioning  process,  new  paintings  came  to  life;  each  an  extension and variation on previous works and concepts, and each completed through an extension or variation on the abovementioned process. To be clear, I did not  mind  creating  the  two  tree-series  variations  that  were  not  chosen,  as  each  painting is a single step in an unending journey, or better yet, a stage in a relentless investigation  into  the  temporally-dynamic  relationship  that  exists  between  existentially‐static elements and the unique visual moments that this relationship produces,  a  relationship  that  in  many  ways  mirrors  the  dynamic  relationship  between artist and commissioner.